In high school, there were days I hung out on ‘The Island of Misfit Toys’. I had good friends who were on ‘the island’ with me. ‘The island’ was Mrs. Stann’s art room.

Sometimes at lunch, we would slip into the art room to avoid the 1000 other students in our high school cafeteria. We’d pull out our lunches or art projects and chat. I did a lot of people-watching there over the years, staring out the wall-of-windows which gave a clear view across the courtyard and funnelled natural light into the space. Mrs. Stann fought hard to keep that wall-of-windows when all the others in the school were replaced by new energy-efficient brick walls.

The interior courtyard was sealed-off like an open-roofed terrarium in the middle of our school, surrounded by classrooms and hallways on all sides. Sitting in the art room, I used to scan the first and second storey hallways from across the courtyard, watching the traffic: kids walking to class, loitering and digging through their lockers.

On days when I decided to eat in the cafeteria, I didn’t really have a clique to sit and socialize with, but I don’t remember ever being turned away from a table in the cafeteria. There was no stereotypical group of mean girls or a single bully in sight. I would just walk up to a table, sit down, and eat my lunch.

At the end of each day, our entire student body of about 1000 piled into a fleet of school buses, second-hand muscle cars or family beaters, and rolled home to their small towns, country lanes, family farms and orchards. For a big school on the edge of a tiny hamlet, it was a good crowd.

One day in the cafeteria, I saw several kids I knew from choir and classes sitting at a table. I sat down to eat my extremely boring sandwich, carrot sticks and apple. Yippee.

Everything about lunch that day was pretty unremarkable. There was a slightly awkward lull when we all finished eating and sat waiting for the bell. That was when Mina Merkin and a friend walked up.

I had known Mina since the middle of grade 6. She pulled up a chair and asked if we wanted to see something. Then she pulled out a quarter and started rolling it down her nose like a ski jump. The coin flew off the end of her nose, and she nearly caught it before it hit the table.

Everyone laughed. Her friend urged her to do it again.

“It’s not as easy as it looks.” she said, holding the coin up at her forehead again.

When she released it the second time, it rolled straight down her nose, and she caught it in midair. Others were watching now. With a bit of prompting, she performed the party trick again. Then again.

Mina asked if anyone else wanted to try it.

“Here. Try it!” She pushed the coin at her friend, sitting across from her.

The chuckling died down as everyone looked away and started shoving lunch wrappers and yogurt cups into their brown paper bags.

Mina held her quarter out to Cindy, sitting to my left. Cindy looked embarrassed and shook her head. Then, Mina shifted her eyes to me and smiled, “You can do it.”

We had a couple minutes to kill before the bell. Why not?

She placed the quarter on her forehead and rolled it in a line down the centre of her nose, catching it in midair this time and making it look easy.

I stared at Mina’s straight nose and thought about my own schnoz. This could go badly, I thought. Compared to her ski slope, my nose was a slalom course.

Mina handed me a quarter.

Everyone at our table was paying attention again. They started chuckling.

I chuckled too and Mina urged me to try it again. So I did, but I missed again.

The more I tried, the worse I got, and the more everyone laughed. When my quarter bounced off the table and rolled onto the floor, one guy had his face buried in his elbow, laughing.

“Almost!” Mina smiled. “Put it right in the middle,” she offered me another quarter.

I felt very self-conscious with everyone staring and laughing, but what the heck! One more try couldn’t hurt.

I placed the edge of the coin in the middle of my forehead and rolled it down again as carefully as I could. Once again, the quarter rolled off the side of my nose.

“Try it once more!” Mina pointed to a spot between her eyebrows. “Put it right here.”

I pressed the coin between my eyebrows, took aim, and let it fly again. Once again it wobbled off the side of my nose and onto the floor. Everyone howled. It WAS pretty funny.

We all headed out the cafeteria doors at once. There was the usual bottleneck outside near the band room as the lunch crowd pressed into the hall and up the stairwell.

I noticed my friends from the lunch table whispering to other kids, who were turning to look at me, then turning away and bursting into laughter. But none of them made eye contact.

Suddenly a cold shiver ran up my spine, and my heart was racing. There was a huge lump in my throat, and pressure behind my eyes. I could feel my face go red hot. I turned to Cindy. She squirmed.

“What’s everyone laughing at?”

I could tell she wanted to push away from me through the crowd. Her face went red as we squeezed past one of the practice rooms across from the band room. I could hear someone singing scales inside.

Cindy wasn’t going to answer me, but I persisted: “Can you just tell me why everyone’s laughing?”

“My face?” I didn’t understand.

Squinting now into a tiny soundproof window on a practice room door, I could see my eyebrows bunched together anxiously. Then I saw it – a mess of kooky black lead pencil lines running up and down my forehead and nose.

Mina had been loading the coins with pencil lead along their edges.

I was standing in the hallway outside the drama room in shock. I wanted a trap door to open under my feet, but trap doors never show up when you need them! I had to get to a sink.

“Thanks for telling me.”

I meant that sincerely and tried to say it that way, but Cindy looked ashamed and darted around someone quickly to put more distance between us.

The student traffic was moving swiftly, and I was holding down a lump in my throat, thinking about the faces laughing at me, the whispering, the pointing. Everyone was in on the prank, but me.

Alone in the rushing crowd, my gaze dropped to the floor, and I walked briskly to the nearest washroom. Luckily, no one else was in there. I felt like a complete idiot.

I was shaking. I had to focus on my breathing and calm my anxiety. I had to get my head together and get to class before the late buzzer.

In that moment, I understood that Mina, with her dirty quarters, was no friend of mine. Even if her prank on me was totally random, which it probably was, I can’t even imagine intentionally making a fool of someone then having a laugh at their expense.

Anyone can be generous and confident when they’re in a positive and supportive situation. But showing generosity, staying calm and demonstrating strength when you’re being bullied and betrayed, takes character.

I was about 15 when Mina pulled her prank, and it left a strong but unexpected impression on me.

There I was, standing at a sink afterwards, washing my face, feeling ashamed and isolated. Luckily I was alone for a few minutes in the washroom. And those few minutes at the sink gave me enough breathing space to realize that even after being caught off guard in a random act of bullying, I was still generous: I was the one who generously agreed to play along with Mina for a laugh in the first place. I laughed along with the others, assuming they were laughing with me and not at me. I thanked Cindy for telling me about the pencil marks on my face. Then I chose to get on with the things that I had to do that day.

After I thought about Mina’s prank, I did a few more things: I let the lousy bullying go unreported and put it out of my mind, then I gave myself permission to forget about Mina too, permanently.

Now, I would simply say: thank you Mina Merkin, for putting my emotional intelligence to the test and showing me exactly who I am.

***
NOTE: I’ve never mentioned the story to anyone until now. And no one sitting at the table that day ever said a word about it to me afterwards either. The betrayal and shame of the moment faded away pretty quickly afterwards. And my own true nature lead me back to JOY – as it always does.

As for Mina’s dirty quarters, their clanking around in my memory bank is a good reminder of my generosity that day.

Do you have a character trait that you can rely on when something goes terribly wrong?

* Although this story is based on a true event that happened in my high school cafeteria, I’ve altered the names of the characters in the story. 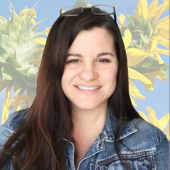 It Ain’t Easy Being Green

What’s the Power in Positive Thinking?

a Boy, a Skull and a Surprise at the Door